Internet Shutdown causes a loss of 3 billion dollars in last 5 years in India.

Why Internet Services close by the Government?

The first motive of the government in shutting down internet services is to prevent any rumors from spreading at the time of violence or unrest and not to allow the protesters to gather in one place so that there is no loss of any kind of thing.

Before knowing the reason for Internet Shutdown, it is necessary to know that the Department of Telecommunication does not maintain any data on the orders of Internet Shutdown issued by the State Governments. But there is also an organization which maintains the data of Internet Shutdown, the name of this organization is sflc.in which stands for Software freedom law center.  sflc collects and updates this data through newspapers, RTI, news channels and other methods. At the same time, he also warns that its data is as much as the relevant of the sources it has taken. i.e. India Today’s DIU Data Intelligence Unit analysed this data and prepared a report through sflc. Regarding Internet Shutdown, it is important for you to know how many type  of Internet Shutdown is.
[post_ads]
Talking about the statistics, between January 2012 and January 2019, about 278 times internet services have been shut down in the last 7 years, out of which 160 shutdowns were done before law and order deterioration and 118 times after law and order deterioration. 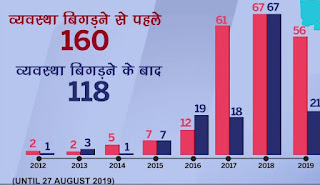 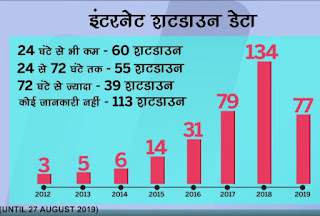 Talking about 2012, the maximum number of internet services have been shutdown in Jammu and Kashmir 180 times, while in Rajasthan 69 times on second place and Uttar Pradesh 19 times on third place. 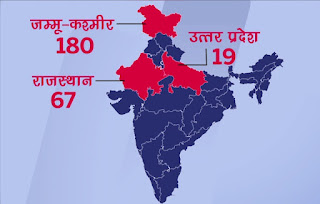 In any state, the home department of that state has the power to shut down internet services under The Temporary Suspension of Telecom Services (Public emergency or public safety) Rules 2017 and the government’s review committee can review the decision taken by this department. Not only this, the central government also has the power to shut down internet services under this law.
By the Code of Criminal Procedure (CRPC) 1973 Internet services can also be closed under section 144. Section 144 of CRPC gives District Magistrate, Sub-Divisional Magistrate or Executive Magistrate appointed by the State Government the power to shut down Internet services to maintain public peace.
Further, section 5 (2) of the Indian Telegraph Act 1885 empowers the Central and State Governments to prohibit the exchange of information for the betterment of the public emergency or to maintain the sovereignty and integrity of India. 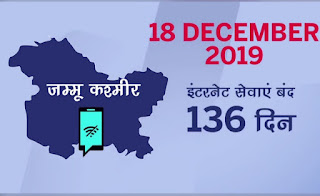 India is the fastest growing Internet market in the world, where digital India slogan is often raised, while the Internet is at the forefront of the shutdown.

According to a website connected to internet activities accessnow.com, about 67 percent of all Internet shutdowns have occurred in India alone in the world in 2018. Apart from this, according to this website, Internet shutdowns have occurred 80 times between January 2019 and July 2019 in India, which makes up 67 percent of the whole world. But one thing to think here is that this data has not been collected on the basis of population, political situation or demographic position of a country. This data only talks about numbers, which is how many times the internet closed.
One can also understand this by an example. Suppose Norway, which is the country of Europe, has not stopped internet even for a single day, so the population of Norway and India should also be seen. In which there is a difference of ground to sky, the total population of Norway is not one fourth of the total population of Delhi alone and we all understand that the bigger population, the more problems are there.
[post_ads_2]
At the same time, in terms of area, India is about 10 times bigger than Norway and if we talk about demographic situation, language and culture changes every 100 kilometers in India, but it is not so in Norway.
Now the question may also arise here that China is a bigger country than India but why there is no internet shutdown like India?  So the answer is that the Internet in China is regulated and controlled by the Chinese government. The Chinese government monitors the Internet services itself in China. No websites like Google, Twitter work there. And if any person posts any objectionable things against the government or even searches all these things, then the Chinese government arrests him.

Talking about the losses due to Internet Shutdown

According to the estimates of the Indian Council for Research on International Economic Relations (ICRIER), in the last 5 years, about 16 thousand hours of internet has been shut down in India, which has a loss of 3 billion dollars or about 21500 crore rupees. The shutdown of Internet services also affects the economy of the country, education of children and food and livelihood of the people, more importantly it violates the human rights of the people.
Post Views: 25